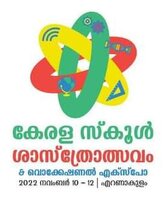 The Kerala State School Sasthrolsavam is the largest Science Fair for students in Asia region. Sasthrolsavam is a combination of five variants such as Science Fair, Maths fair, Social science fair, Work Experience fair and IT fair. The objective of such a massive event is to nurture the talents of students in areas such as Science, Maths, Work Experience etc through the learning processes which would eventually benefit the whole society at large. The Sasthrolsavam is organized by the State Education Department and includes students from Lower Primary to Secondary, Higher Secondary and Vocational Higher Secondary sections. The Mega event itself is unique model for the world apart from being the venue for numerous experiments and findings. The first phase of the event is organized in schools by the respective subject wise clubs such as Science Club, Maths Club etc. The winners of the school level competition compete at the sub district and district level contests and the best talents eventually qualify into the State level Sasthrolsavam. The Science Fair includes four major contest categories such as Still Model, Working Model etc. Through these competitions, the science aptitude of the students along with his / her innovativeness, creativity, completeness, ability to communicate their idea etc are evaluated. The first and second place winners of the State Sasthrolsavam would be eligible for participating in the Southern India Science Fair which would be jointly organized by Vishwerayya Industrial & Technological Museum, Bangalore and Education Departments of various South Indian states. The Winners of the Sasthrolsavam would also get an opportunity to participate in the Jawaharlal Nehru National Science Exhibition, the premier Science show of the country. The Maths fair comprises of as many as twelve items including constructions, puzzles, still working models etc. In case of the Social Science fair, six categories based on regional drawing, atlas creation, models etc would be there. Another highlight of the Sasthrolsavam is the Work Experience fair which not only evaluates the work experience knowledge of the student but also would review of how best the students are able to use their work experience knowledge in their day to day activities. This fair would also witness Live competitions and display contests. The active participation of students ranging from Lower Primary to Higher Secondary / Vocation Higher Secondary sections makes the event a platform for science knowledge sharing beyond ages. Another key feature of the Sasthrolsavam is ‘Vocational Expo’, the display of products created by vocational higher secondary students through Production Training center which is part of their curriculum. A Career Fest is also conducted as part of the mega event, which would focus on career guidance activities and higher education counseling for higher secondary and vocational higher secondary students.

The IT Mela is a platform provided by KITE, General education department, which enables the students to showcase their talents in ICT which is part of their curriculum. The event is aimed at developing interest, providing encouragement to the student community for exhibiting independent initiatives, and imbuing the necessary thrust to embrace IT beyond the curriculum. Students from public schools compete in various IT based competitions, including digital painting multimedia presentation, web designing, Malayalam typing,  animation, Scratch programming and IT quiz, during in the event.